removed from the large stone portico at the Queen Victoria Street main entrance of "Mansion House Buildings" by J&J Belcher c.1870 , (also known as "No.1 Poultry" or "The Mappin & Webb Building", City of London, dem. 1996),

each bearded giant emerging from a roundel, turning to each other, each sporting a foliate ornamented helm topped with a bird, and accompanied with their attributes - Gogmagog his kettenmorgenstern and his bow and quiver, Corineus his Tin-miner's pick and sword,

The two giants Gogmagog and Corineas, are the mythical guardians of The City of London. As early as 1554 their effigies lead the procession of The Lord Mayor’s Show through the City. They were positioned variously at London Bridge, or Temple Bar, in order to welcome the Monarch on their arrival from Westminster. The Guildhall archives have the show’s Pageantmaster alluding to them by name in 1605.

In later records, in 1672, Pageantmaster Thomas Jordan describes them in detail - and they sound fantastic:

"I must not omit to tell you, that marching in the van of these five pageants, are two exceeding rarities to be taken notice of; that is, there are two extreme great giants, each of them at least fifteen foot high, that do sit and are drawn by horses in two several chariots, talking and taking tobacco as they ride along, to the great admiration and delight of all the spectators. At the conclusion of the show they are to be set up in Guildhall, where they may be daily seen all the year, and I hope never to be demolished by such dismal violence as happened to their predecessors; which are raised at the peculiar and proper cost of the City”...

… their predecessors having been burned in the Great Fire of London six years previously.

These replacement giants, like their charred 16th Century forebears, were made of wickerwork and daub. This 17th Century pair ultimately fell victim to age, the rigours of their annual outings, and mice, and were finally replaced in 1708.

But these replacements were something else altogether - they were a magnificent pair of wooden statues. They were vast. They were carved by Captain Richard Saunders – a carver with workshops at Cheapside who was paid £70 and saw them installed high up in the main hall. These were not paraded around the City annually  - wicker equivalents may have still been made for the annual pagaents thereafter. We know effigies of Gogmagog and Corineus were certainly being paraded in 1827 – perhaps a revival of the tradition which then continued to the present. 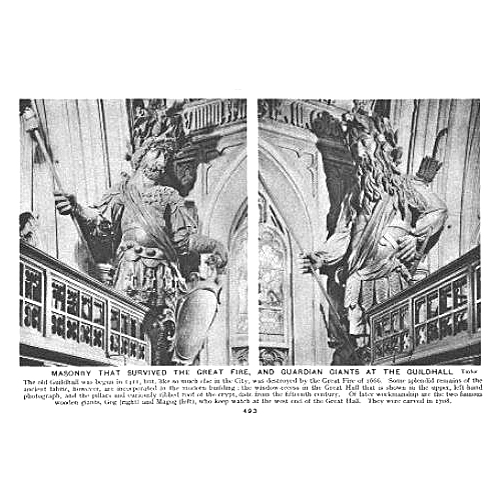 Sadly, the early 18th Century carved figures at The Guildhall were destroyed in the Blitz in November 1940. (Replacements – somewhat smaller renditions and to a new pattern - were carved by David Evans in 1953 and they remain the guardians at The Guildhall today.)

In 1870, architect John Belcher, in designing the fabulous carved stone doorcase for Mansion House Buildings, clearly referenced the vast early 18th Century wooden figures that were then still standing in the Guildhall. In referring to old photographs we can see that Saunders wood statues and Belcher's stone heads are facially similar. On passing along Queen Victoria Street, Victorians would have recognised the stone heads of Gogmagog and Corineus immediately.

And as the Lord Mayor’s show would have paraded down the new Queen Victoria Street for the first time around 1870, we can only imagine the giant effigies of Gogmagog and Corineus lurching past their stone renditions nodding back to them from the grand portal of Belcher’s fabulous Venetian-Gothic building. This annual meeting of the giants unfortunately ended in 1996 when The Mansion House Buildings at No.1 Poultry (otherwise known as The Mappin & Webb Building) was cruelly demolished.

For more References to Gogmagog and Corineus – the Giants of the Guildhall of London - see: https://www.pmsa.org.uk/pmsa-database/41/

Enquire about "A pair of Victorian carved Portland stone "Romayne" portrait heads of Gogmagog and Corineus,"