The Empire Studio – a chapel on wheels,

the steeply pitched roof, with pierced carved gable ends above the rectangular hut, a central door to one long side, and three Crittal windows, the interior decorated with "Bloody Empire" paper by "Timorous Beasties", and an oak floor - the detailing largely created from salvaged sources; the whole living wagon clad in corrugated steel panels and raised on a galvanised chassis with tow-bar, a jockey-wheel, a single axle and with adjustable stabilising legs to each corner, the interior is fitted with electric plug sockets and pendant light fittings, wired to a distribution board and external hook-up point,

It was both technology and demand that saw the rise of Tin Tabernacles in Victorian Britain. Corrugated iron was invented in 1837 and corrugated iron buildings were thereafter more prevalent than you might think. Conceived as semi-permanent structures, often as non-conformist chapels, they have certainly lasted far longer than their creators ever envisaged. They can still be found lurking in the buddleias in the outskirts of many towns and villages. They are wonderful buildings, economic and very useful, so LASSCO has teamed-up with Love Lane Caravans in order to re-create them. But, ours are on wheels!

It is ideal for summer dining, kids' sleep-overs, a garden-room office, guest room or simply as an idyllic space to while away long sunny afternoons. You can move it to a new position in your gardens every weekend. It can be pulled onto a trailer so you can take it with you whenever you like. And being on wheels it doesn't require planning consent. It is bigger and better than a Shepherd’s Hut … and you saw it here first! We think it is perfect for a Country Estate – whether for private use or for Events, Exhibitions or Festivals.

Each one will be different from the last; salvaged elements are used through-out. And if the Empire Studio doesn’t quite meet your needs you can specify the fit-out for another to your liking.

If you've never seen a Tin Tabernacle being towed - we have footage here: (but be aware that The Empire Studio is not built for the Open Road as the previous example was).

Two examples of old Tin Tabernacles:
Chiltern Open Air Museum have re-erected and restored The "Little Tin Church" or The Henton Mission Room which dates to 1886 (below left). They salvaged it in 1993 from Chinnor, not far from LASSCO Three Pigeons. It was originally pre-fabricated by Boulton & Pool of Norwich. 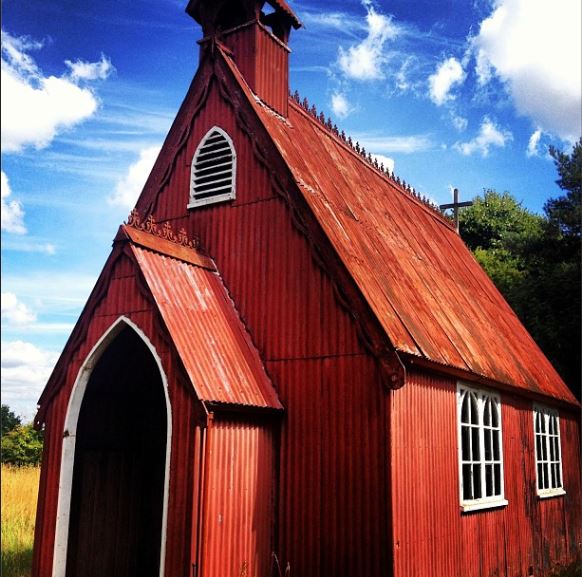 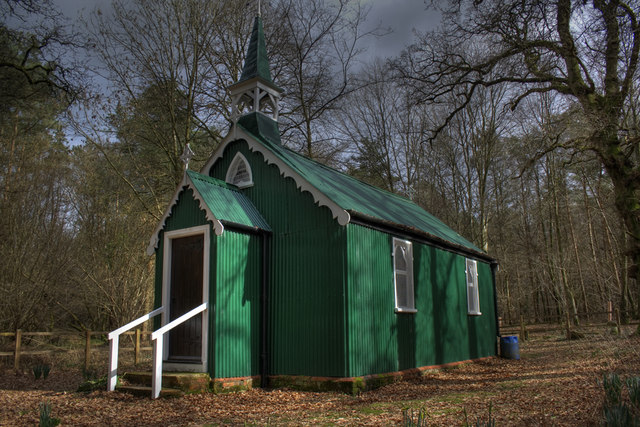 Still operating as a chapel, another is found in the woods by Bramdean Common in Hampshire (Above right). It was built in 1883 in five days. The Reverend Alfred Caesar Bishop provided it in order that the commoners, charcoal burners and itinerant gypsies who seasonally occupied the common would be able to attend church.A history of Tin Tabernacles can be found here. And a gazetteer of extant chapels can be found here. But you won't find any other with tow-bar and wheels!

Enquire about "The Empire Studio - a chapel on wheels,"