the grille of intersecting channelled mouldings with pierced squares and an integral rail moulded to the top edge,

Duke Humfrey's Library is the oldest reading room in the Bodleian and is one of the oldest libraries in the world. The interior is one of Oxford's most celebrated rooms, with its carved and painted ceiling and oak bookcases and it still functions as a reading room for users of the Bodleian. It consists of the original medieval section (1487), the Arts End (1612), and the Selden End (1637). It houses collections of maps, music, Western manuscripts, and theology and arts materials and holds the University Archives and the Conservative Party Archive.

These gates are clearly used for the control of access to the various parts of the library - and still are today - but are specifically seen to screen one particular bay, known as the "caged" library ,in order it can be reserved for the descrete use by royal readers. 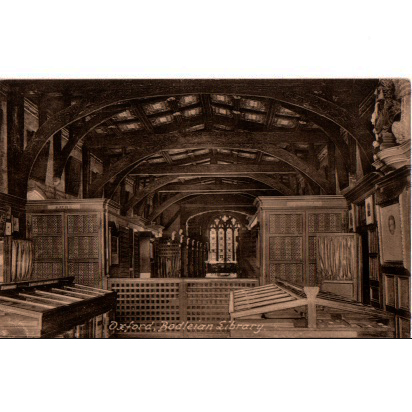 Duke Humfrey's Library is named after Humfrey of Lancaster, 1st Duke of Gloucester, a younger son of Henry IV. He was a connoisseur of literature and commissioned translations of classical works from Greek into Latin. When he died in 1447, he donated his collection of 281 books to the University of Oxford. At the time, this was considered an incredibly generous donation as the university only had 20 books. All classes at that time were taught via oral lectures; books were handwritten and were only for the extremely wealthy.

Oxford built Duke Humfrey's Library as a second storey to the Divinity School in order to house his collection in 1450–1480.

In 1550, during the Reformation, the King's Commissioners despoiled the library of books in order to destroy the vestiges of Roman Catholicism in the country. The books were probably burnt, and in 1556 the furniture was removed by the university. Today, only three of Humfrey's original books remain in the library.

The Library was refitted and restored from 1598 by Sir Thomas Bodley and in 1610–1612 the east wing (now the Arts End) was added. The west wing (now the Selden End) followed 20 years later. The books in the oldest part are accommodated in oak bookcases which are at right angles to the walls on either side with integral readers' desks. The ceiling consists of panels painted with the arms of the university.

The screen gates were discovered by LASSCO in a joinery workshop where they had been put aside during reformatting in the past. From photographs, the gates were used in order to control access to the various bays of the library. We suspect they were introduced in Victorian times and some of the grilles can still be seen in Duke Humfrey’s Library today.

A note on the Copyright to the old photo of the Library. This image is scanned from a postcard in LASSCO’s possession – postmarked 1930.

Much of the above information sourced from Wiki.