Annie Helen Nairn Monro was born on 16th December 1901 in Calcutta. Within a couple of years the family had returned to their native Scotland. After school and an Arts degree at Edinburgh University she went on to Edinburgh College of Art, where she specialized in wood engraving. She received her Diploma in 1927.

While still at college, she had visited the Edinburgh and Leith Flint Glass Works and submitted designs for glass to the company. They later included examples of her work in the Royal Academy of Arts Survey of British Industrial Art (1935), which showcased the best of contemporary design.

The quality of her engraving and imaginative use of the medium was immediately appreciated by the publishing industry, particularly the Edinburgh publisher Thomas Nelson and Sons. For forty years, from 1933, she illustrated a wide range of childrens’educational and recreational books for Nelson, including their Classics editions of Alice in Wonderland and Alice Through the Looking-Glass, as well as producing illustrations and covers for other publishers.

When, in 1938, the College of Art elected her to an Andrew Grant Fellowship, her interest in glass had not diminished and, on the advice of Professor W.E.S. Turner, Head of the Department of Glass Technology at Sheffield University, she decided to study at the Kunstgewerbeschule in Stuttgart under Professor Wilhelm von Eiff. There followed two years of intense study of glass making and decorating techniques, which ended hurriedly on the outbreak of war.

In October 1940 her fellowship at Edinburgh College of Art was renewed and she was asked to establish a department of glass engraving. It started in January 1941 with four students, and two lathes but with the goal to cover all aspects of glass design. She married Professor Turner in 1943 (in a glass fibre wedding dress) and thereafter usually used the name Helen Monro Turner. Professor Turner founded the Turner Museum of  Glass in Sheffield in the same year.

The Department expanded. Lampworking was added, then sand-blasting, cutting wheels and finally a furnace. They produced a stream of glass artists who transformed the glass industry in post-war Scotland. Monro also advised and taught in Norway.

Her reputation as a glass engraver spread rapidly and commissions kept coming, leaving little time for speculative work or exhibitions. The scale of her work ranged from a single glass or a tiny engraved crystal box to huge architectural commissions such as the windows on the staircase in the National Library of Scotland, and the present pair of windows for the entranceway of Aldermary in the City of London.

The Aldermary commission originally comprised a window of three panes, the central pane incorporating a working clock, which was signed “Helen Monro”. The central pane did not survive the extraction from site without damage and ultimately had to be destroyed on safety grounds. The flanking panels are deeply cut with extraordinary angular and flowing designs - pertaining to the elements and interwoven with abstracted forms. 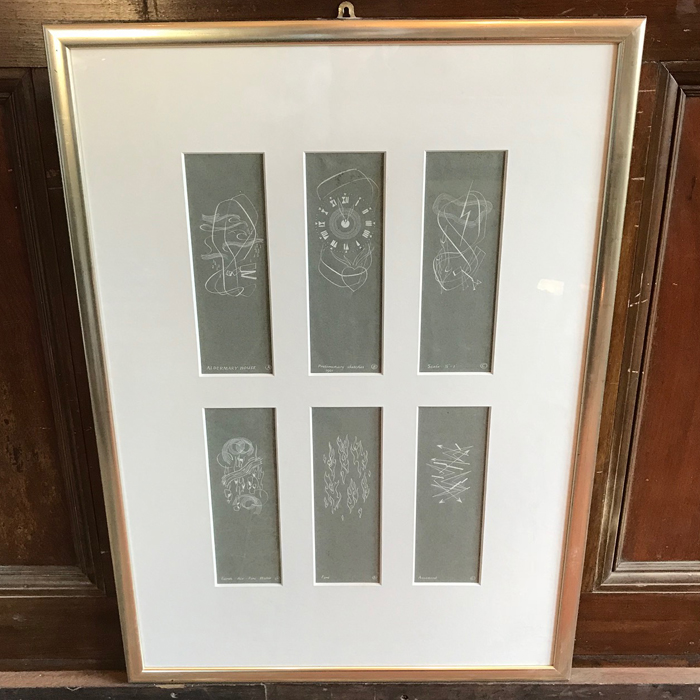 In a strange twist of fate LASSCO was very lucky to have discovered - and then acquired - the original Monro drawing for the Aldermary House windows. The salvaged panes are pictured top left and right in what are the preparatory drawings for six panes, including the central clock.

Enquire about "An extraordinary cut-glass window"