A pair of composition stone “sleeping and waking lions”, large

These lions are available in a terracotta colour - a smaller size also available.

Antonio Canova carved the original Carrara marble pair of lions as guardians to the tomb of Pope Clement XIII at St. Peter’s, Rome.He completed them in 1792.

Canova is perhaps the most celebrated of Neo-classical sculptors. He received widespread adulation in his own time and worked for a galaxy of European notables including Napoleon and the Duke of Wellington. His early career was in Venice; he moved to Rome in 1781. His speciality was the reworking of the themes of Hellenistic sculpture, breathing more naturalism into the formulaic postures with an intimate understanding of his material – marble.

Later copies of the lions were made in bronze – a pair of these are well known in Washington D.C.  – guardians to the Corcoran Gallery. These bronzes were cast from Canova’s in Rome where Washington businessman Benjamin Holladay bought them in 1860 for $6,000 and placed in front of his home The lions were purchased at auction by the Corcoran Galley in 1888 and placed as guardians to the entrnce when it was at Pennsylvania Avenue and Seventeenth Street, N.W. – moving with the gallery to its new location at Seventeenth Street and New York Avenue, N.W..

Another rendition of the lions was made by the Val d’Osne foundry near Paris – these in cast iron. A pair of these can be seen guarding the Town Hall in the Market Square, Aylesbury. 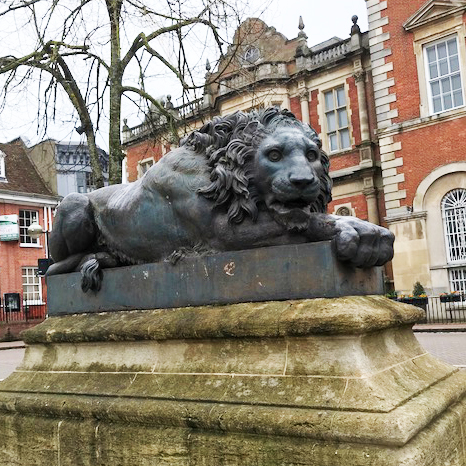 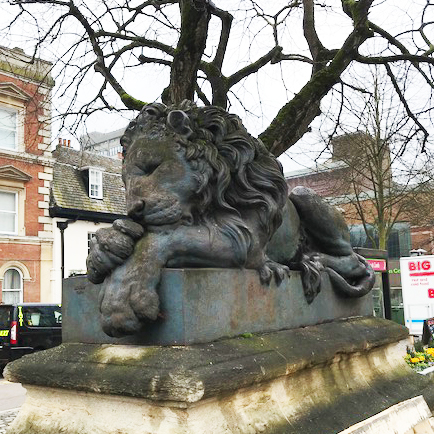 Enquire about "A pair of composition stone "sleeping and waking lions", large"