by John Hardman & Co., framed together, removed from the Bar Convent, York,

each of the leaded panes with arcaded tops, geometrically leaded and depicting the Virgin "Maria" to one light, the standing robed figure with a starburst halo - opposed by St. John robed to the other, the saint accompanied with his attribute, an eagle, and bearing the dedication "Pray for the soul of John B. Hardman K.S.G who died Nov 1 1905 Et Signum Magnum Apparavit in Calo Charity",

The original and on-going connection between the Hardmans and Pugin was founded in their Catholic faith - the specific connection to Bar Convent in York is being researched.

The Convent of the Institute of the Blessed Virgin at Micklegate Bar, York, better known as The Bar Convent, is the oldest surviving Roman Catholic convent in England, established in 1686. The laws of England at this time prohibited the foundation of Catholic convents and as a result as with others, the convent was both established and operated in secret. 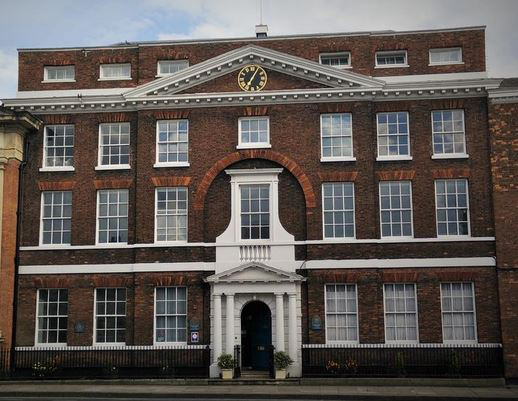 Frances Bedingfeld, a member of the Sisters of Loreto, signed the deeds for the land the convent was to be built upon on 5 November 1686, under the alias Frances Long. Today, The Bar Convent is a popular York destination for tourists and offers bed and breakfast accommodation, meeting rooms, a gift shop, café and museum exhibition about the Convent's history. The stained glass windows were for  some some while, having been removed from the chapel during renovations in 2015, on display in the museum.

Enquire about "A pair of Edwardian stained glass windows,"