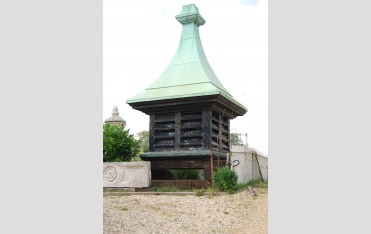 The Saw Swee Hock Student Centre (SAW), the London School of Economics’ ( LSE) latest landmark building,  is the first new building it has commissioned in over 40 years.  SAW’s dramatic sculptural form and unusual perforated brick façade, designed by Irish architect O’Donnell + Tuomey has been garnering praise from students, staff and architecture critics alike since opening earlier this year.  Critics have called the building “richly considered and finished”, “eccentric and deeply satisfying”, “fantastically individual” and “a fold-out marvel [and] lesson in architectural origami”.

LASSCO rescued the cupola from the old building. Clad in copper and at over 4 metres high it makes its own architectural statement – come and view it at LASSCO Three Pigeons before an LSE alumni snaps it up!    Details:  https://www.lassco.co.uk/an-impressive-oak-and-pine-cupola