Our shop at Ropewalk, Maltby St in Bermondsey, South East London, incorporates a fabulous series of Victorian brick-built railway arches. These giant arcades march along the length of The Ropewalk giving us our warehousing and weekend market space. Just eastwards, and now entirely concealed, the railway arches span the River Neckinger that flows into the Thames at Jacob’s Island.  Jacob’s Island, the area of Bermondsey riverfront immediately east of St. Saviour’s Dock, was one of South London’s earliest and worst slums; it is celebrated in fiction as Bill Sykes’ lair in Charles Dicken’s Oliver Twist.

The area was developed by the early 18th century, but the worst of the housing was cleared in the 19th century to make way for warehouses.

Our friends at Hoxton Beach  have imagined this time thus:

”This slightly altered view [around 1836] is through the Ropewalk Railway Arches before the widening of the London to Greenwich Railway viaduct – this was the first elevated railway in the world and the first passenger railway serving the capital …….. beyond is Jacob’s Island and the mouth of the Neckinger aka St Saviour’s Dock.

Here is Henry Mayhew’s description of the area then:

“On entering the precincts of the pest island the air had literally the smell of a graveyard, and a feeling of nausea and heaviness came over any one unaccustomed to imbibe the moist atmosphere. Not only the nose, but the stomach told how heavily the air was loaded with sulphurated hydrogen; and as soon as you crossed one of the crazy and rotten bridges over the reeking ditch, you knew, as surely as if you had chemically tested it, by the black colour of what was once white lead paint upon the door posts and window sills, that the air was thickly charged with this deadly gas. The heavy bubbles which now and then rose up in the water showed you whence at least a portion of the mephitic compound issued, while the open doorless privies that hung over the water-side, and the dark streaks of filth down the walls, where the drains from each house discharged themselves in to the ditch were proofs indisputable as to how the pollution of the ditch occurred.

The water was covered with scum almost like a cobweb, and prismatic with grease. In it floated large masses of rotting weed, and against the posts of the bridges were swollen carcases of dead animals, ready to burst with the gases of putrefaction. Along its shores were heaps of indescribable filth, the phosphorated smell from which told you of the rotting fish there, while the oyster-shells were like pieces of slate from their coating of filth and mud. In some parts the fluid was as red as blood from the colouring matter that poured into it from the reeking leather dressers’ close by.”

With thanks to Patrick Matthews of Hoxton Beach.

and here’s the ”Good New Days” at LASSCO Ropewalk  (open 7 days a week including the week-end market) : 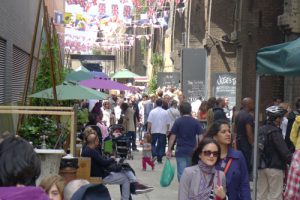