Review: Well what a great night! We seemed to have timed our party well – not just because the so-called “Salvage Olympiad” fell on the day that the Olympic flame arrived on these shores but, just as our party got underway we were treated to a fly-past of a Lancaster Bomber and four Spitfires in formation!

Thanks goes to Peter Hone and Daren Greenhow – our brace of Olympian Sculptors – whose hard work and endeavour made for a superb exhibition. The sterling efforts of our own Lucasz and Jarek who have worked so hard on the considerable logistics of this event – including the building of the bar and stage – were much admired (as was Chef Sam’s wonderful food).

Thank you to everyone who came – it was a jolly crowd. But particular thanks goes to “The Little Bulb Band” who played and played and played. The music was fabulous and they just kept on playing. The party over-ran a bit – and they played. A tight knot of locals propped up the bar as it got dark and the band played on. The heavens opened and with the rain lashing down on the cheerful throng – still they played. The performance was likened to a cross between Glastonbury Festival and the band that played on as the Titanic sank! … but I don’t think we want to extend that metaphor too far!

Subscribe to our eNewsletters if you don’t want to miss the next event at any of our shops!

We’ll be showcasing the latest amazing sculpture of Daren Greenhow as we launch his Olympiad Exhibition in the gardens here at LASSCO Three Pigeons. You can meet Daren and be the first to see his latest creations. Daren’s show at LASSCO is part of Oxfordshire Artweeks. All are welcome – please bring some friends! 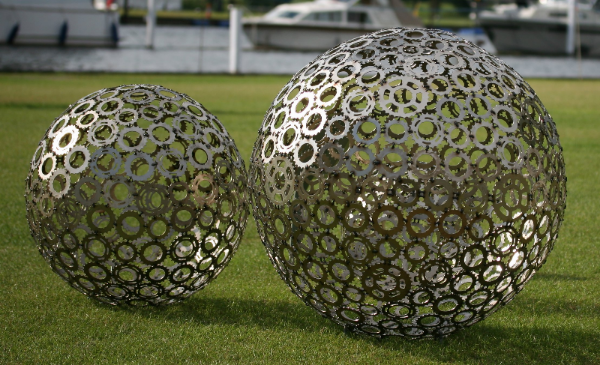 Above: Sprocket Spheres by Daren Greenhow 2012

We will also open our new gallery “The Hone Exchange” – the most extraordinary transformation to befall a Telephone Repeater Station. It has been created by Peter Hone in homage to The Soane Museum and is destined to become a local landmark in its own right. 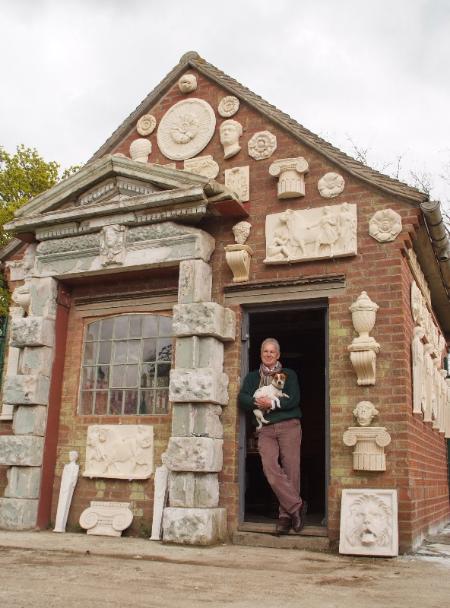 Above: Peter Hone with Basil takes a break from plaster casting in The Hone Exchange

All this is offered up to the sounds of The Little Bulb Band who will entertain us as we swig local ales from the Shotover Brewery, sip-a crisp-white or two and grab some nibbles.

We look forward to seeing you – it is five years to-the-day since our launch party at The Three Pigeons so we’d love to share that landmark with you: our friends – both current and future! Please forward the address for this web page to anyone you think would like to come.

Daren Greenhow, a former Insect Physiologist, uses salvaged metalwork, cogs, scrap metal and architectural salvage to create beautifully wrought and witty sculpture – large and small. He is sculpting on an Olympian theme. Here at LASSCO Three Pigeons we will have our own Olympic torch. This is the second exhibition that Daren has staged with us for Oxfordshire Artweeks – the first was a “sell-out” with Daren having to go back to the workshop to meet demand afterwards. So don’t hesitate if you want to buy one – you have been warned! 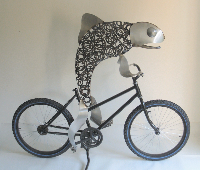 Peter Hone is a celebrated Master Plaster Caster. He is also a collector and authority on Coade Stone – the decorative “artificial stone” created by the redoubtable Mrs Eleanor Coade in her Lambeth factory from 1769. Coade’s sculpture and decorative architectural ornament was used by architects and designers from the 18th Century onwards and has become highly sought after. Peter’s obsession with neo-classical ornament has led to a passion for reproducing it in plaster as well as, to emulate Mrs Coade, a weatherproof material to his own recipe: “Hone Stone”. Peter’s London apartment (below) has to be seen to be believed – the floors, walls and even the ceiling are given over to stoneware and plaster castings. It has featured in numerous publications. We are delighted that Peter has applied his casting magic to our old “Telephone Repeater Station” in a quiet spot at The Three Pigeons – now called “The Hone Exchange”.

Come and see the transformation. Make your own home like Soane’s with some Hone Stone – it is all for sale. Make the Master Plaster Caster work Faster! 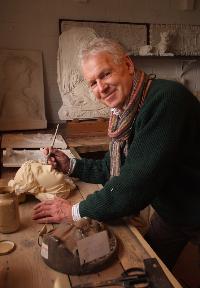 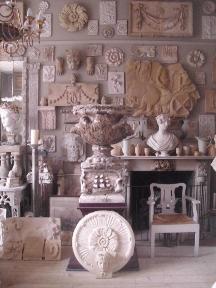 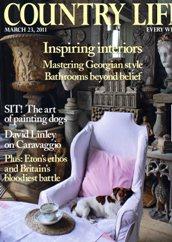 The Little Bulb Band: Providing a wonderful soundtrack to our evening we are thrilled to invite this collective of raw talent and enthusiasm. In their own words they are “committed to making music that is wild, imaginative and fully theatrical”. They received a thunderous reception in Great Milton as part of their recent touring show; we’ve managed to tempt them back for more … this time in the fabulous setting of our Architectural Salvage wonderland.