the rectangular tablet incised with a zodiac wheel, signs of the zodiac, numbers and dates for the casting of horoscopes, bearing the inscription "HEW DRAPER OF BRISTOW (Bristol) MADE THIS SPEER (sphere) THE 30 DAYE OF MAYE, 1561" and a founder's stamp "No.1.S"

Hew (Hugh) Draper’s carving, low down in the wall near a window of his cell in the Salt Tower at The Tower of London, is one of the best known of the 300 surviving examples of prisoners’ graffiti at The Tower of London. Of them, 74 are known to be from those incarcerated in the 16th Century. Draper’s is remarkable not just for being one of the most developed of Elizabethan scratchings but also for it being one of the more defiant. Two carvings are attributed to him; there is possibly a third. 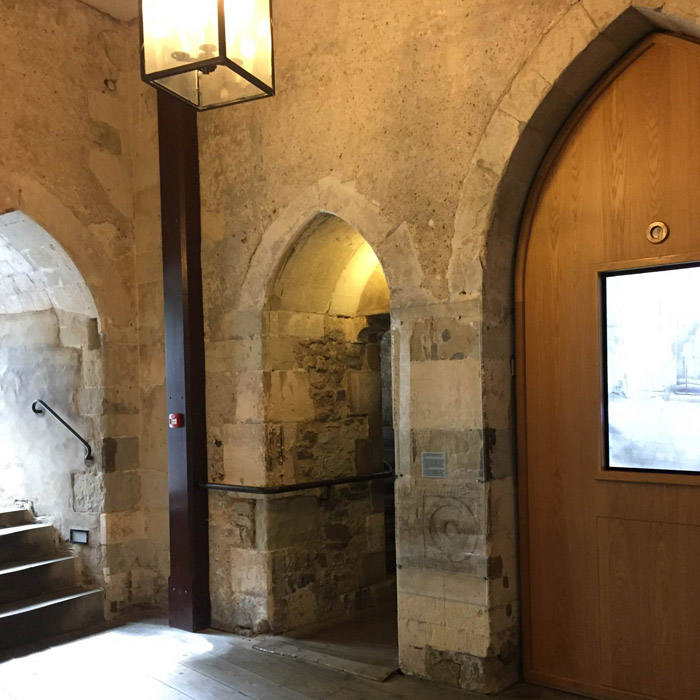 Draper was an Innkeeper (or “Vintner”, or perhaps merchant too), from Bristol and was thrown into The Tower in 1560 under charges of “Sorcery” - which he denied. He was locked up for at least two years and it isn’t known what became of him. No records show that he was executed but a record does show that he was “verie sicke” at one point. This is given as a possible explanation for the carving being low to the floor – a sculptor who was of necessity prone or seated (but perhaps a need to catch the sun or hide the progressing work behind furniture could be more likely).

It transpires that Draper had laid a curse on Sir William St. Loe and his wife Lady Elizabeth St. Loe. The latter is better known as “Bess of Hardwick” – one of the most powerful political figures of Elizabethan England. Sir William and Lady St. Loe held estates at Tormarton near Bristol which is a likely source of a dispute. He had renounced his dabblings in the Dark Arts and had burned his books but this chart for the casting of horoscopes certainly indicates a deep knowledge and interest in heterodox beliefs. “For a man held prisoner for witchcraft, the carving of “magical” astrological signs was gutsy and dangerous and demonstrated both Draper’s sincere beliefs and his defiance of the authority attempting to repress them. Jesuit carvings in the same tower demonstrate similar risky religious expression”(1). That said, horoscopes may have been viewed as an entirely legitimate past time and not bracketed with witchcraft; Queen Elizabeth I was well known for consulting her horoscope. 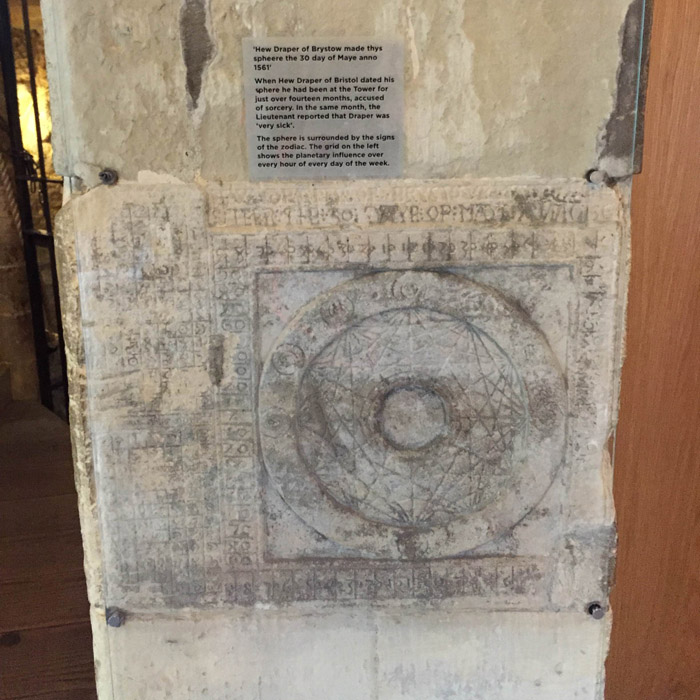 In a piece for The Guardian in 2011, Jonathan Jones concludes:

“Here is a rare survival of popular art. Draper was not a priest, a university scholar, or a gentleman. He was an innkeeper. In these mysterious marks, we gain access to the mind of a freethinking everyman from Tudor Britain – an outsider using his reading to achieve power over the world.”

What happened to Draper? No one knows. His death is not recorded in the Tower annals; nor is his escape, or his later life. Perhaps the occult experiment he was performing in the Salt Tower was a success and he vanished from captivity in a puff of smoke.”

LASSCO has made a mould of the Draper panel from a bronze casting we acquired recently - enabling us to reproduce it in plaster. We don't know when access had been granted to shutter off the graffito panel in the Salt Tower in order to take an impression of it but it can only have been commissioned by The Tower of London - and not that recently - such castings, readily permissioned in Edwardian times are frowned on today. The bronze is known to have languished in a store at The Tower before being given to an employee who worked there for many years. LASSCO acquired the tablet from his family and we have since sold it.

We would like to thank Spike Abbott, himself a Yeoman Warder (402) - a Beefeater - at The Tower for sending the photographs of the origianl Draper panel shown here.

(3)    The Gentle Author offers a photographic round-up of Graffiti at The Tower of London in this blog.