each knopped spindle, square in section, forged with bifurcating scrolls to the top, remnants of old paint, the foot set in lead, Please enquire for quantity remaining: Original batch salvaged - approx. 80No. on 150mm centres. Majority "on the rise" (i.e angled for a staircase).

Lindsey House stands on the West side of Lincoln's Inn Fields and is a beautiful and rare survivor from pre-Commonwealth London. It dates to 1640 and it is thought, fairly certainly, to have been built to designs by Inigo Jones. The builder was David Cunningham, 1st Baronet of Auchinhervie, a friend of the mason-sculptor Nicholas Stone. It survives today only after intervention from SPAB (The Society for the Protection of Ancient Buildings) in the mid 20th Century when it was threatened by proposed developments on Kingsway.

We have it that this ironwork was removed during alterations that were undertaken on the westernmost range of "No.60" ... possibly at the time of the Kingsway project. The external iron balconies at Lindsey House are much remarked upon; we can only conjecture that these internal spindles were from the same forge. As such, this ironwork is a very early example. Inigo Jones - an innovator who seems to have been way ahead of his time in most aspects of design - saw the decorative potential in staircase and balcony ironwork long before his peers:

"Iron became the mode for stair rails, brackets, scrapers, chests and particularly weather vanes. Inigo Jones seems to have introduced iron balconies in England at Kirby Hall Northants (1636); later he used them at Thorpe Hall, Peterborough, and Hutton-in-the-Forest. They are characterised by extreme simplicity of plain or twisted bars, with a pair of twisted standards  at the angles." 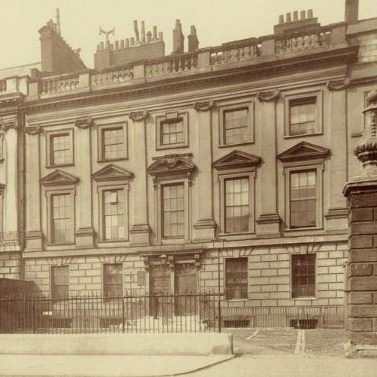 The Survey of London gives a good account of the house. It derives its name from a period of ownership in the 18th century by the Earls of Lindsey. In 1751 it was divided into two houses with Isaac Ware reformatting the interiors. Sir Spencer Perceval lived in the house from 1791 until his assassination in 1808. Neighbour Sir John Soane surveyed it in 1802.