each spherical acrylic shade held in a bronze clasp atop the turned column with entasis, raised on a square base,

One shade lacking (sadly, when these were in transit to us, crossing the Thames at Vauxhall Bridge, one of the shades blew off and was last seen heading down-river through Westminster). The lamps can be seen in situ in the photo below.

Victor Heal's No.1 New Change, built in 1960, from which these lamps come, was considered unadventurous when it was opened. Since it was brought down and replaced in 2010 with Jean Nouvel's "stealth bomber" shopping centre (Prince Charles had a few things to say about St. Paul's new neighbour) it has been missed. Jonathan Glancey in The Guardian commented:

"Until it was demolished to make way for the Nouvel building, St Paul's did have a good, and modest, neighbour in the guise of No 1 New Change, a Portland stone and red-brick office complex designed for the Bank of England by Victor Heal. Completed in 1960, this cautious and polite building was much mocked. And, yet, for all its conservative nature, Heal's building was a careful foil to St Paul's. Where Heal nodded politely to Wren, Nouvel winks at him cheekily as if saying: "Come on, grandpa; get down with the bling, and get shopping." 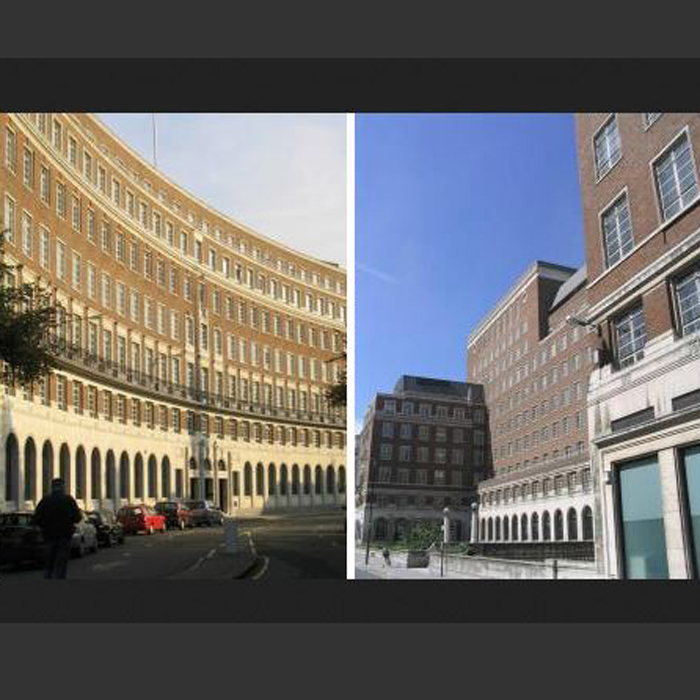 Enquire about "A pair of large travertine columnar lights,"