A mid Victorian cast and and wrought iron well winch,

the double hand-operated fly-wheels and cogs bearing the "Tasker & Co." stamp, with turned wooden handles, mounted on a stand with splayed ribbed supports and a steel well-cover,

Viewed from LASSCO Three Pigeons, the Chiltern Hills are ranged along our southern horizon. Before the arrival of pressure water mains, the villages in these hills always had a problem with water shortages in dry periods; chalk downland drains very well. The problem became particularly acute after a series of dry summers in the 1850's - Stokenchurch had even had to rely on horse-drawn bowsers being hauled up from Lewknor - a punishing climb.

The story of the thirstly villagers had even reached the Maharajah of Benares in North West India. Remembering the contributions of Edward Reade of Ipsden who had both related the crisis to him when Governor of the region and had assisted in the sinking of a well for villagers there, the Maharajah reciprocated, and as a philanthropic gesture, financed the digging of an astonishing well at Stoke Row - high in the hills near Henley-on-Thames. 368feet deep it took a year to dig. The decorative winch-gear that capped it off was made by Wilders of Wallingford at their Nettlebed foundry. Opened in 1865, it was then crowned with an Indian style canopy designed by Reade - the winch itself surmounted with a golden elephant. An ingongruous surprise, it is still found in the village today and has recently been restored 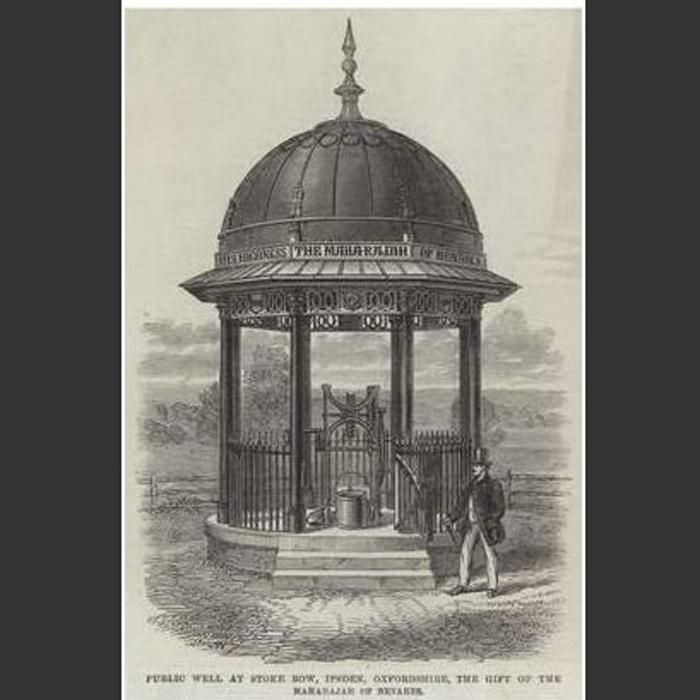 Such was the Stoke Row success that other wells were sunk in neighbouring villages: Binfield Heath, Rotherfield Peppard, Gallowstree Common, Kidmore End, Highmoor and Ipsden. Less well-known is that the Ipsden well, also dug in 1865, was also financed from India - and still bears the plaque crediting "Raja Sir Deonarayu Sing KSI" for his kindness; he had been inspired by his fellow countryman the Maharajah. 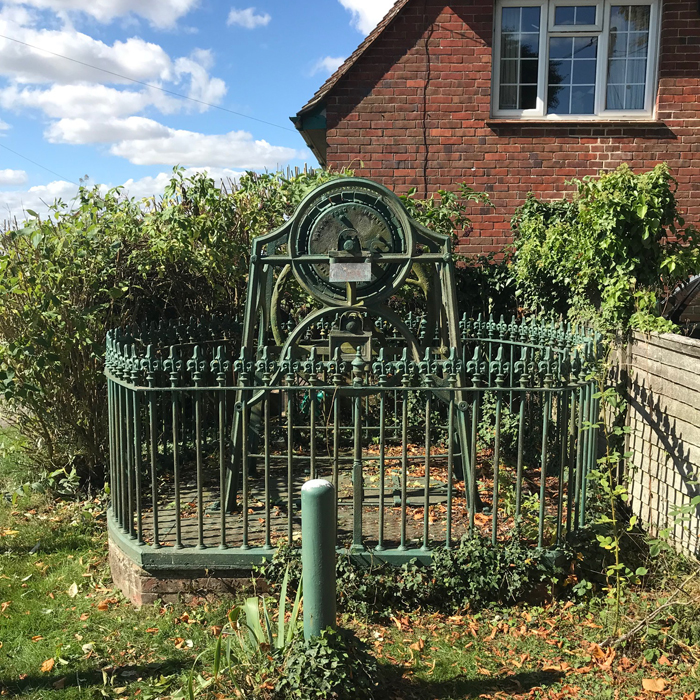 The Taskers winch, unearthed by LASSCO in a builder's yard in Henley-on-Thames, is of the same design and a similar date as the Wilder winches at Stoke Row and Ipsden but, unfortunately the well it served isn't currently known - research continues. It was in a sorry state when we found it but we have put it back together and it now works again. It stands with poise - an elegantly constructed piece of ironwork. As with the Wilder winches it works on a hand-wound system for a very deep well; it has a winding handle each side, geared. The wheel has alternating teeth to grip the rope which would have had a bucket to each end: the empty descending, the full one rising. As with the extant well-winches at Stoke Row and Ipsden it stands on a steel platform with an oval aperture accessing the well - the trap doors are missing but could be replaced.

Taskers is an unusual engineering company that, for 170years, operated from the Waterloo Ironworks in the Anna Valley near Andover Hampshire. The origins of the firm, as indicated by the name of the works, dated back to Regency times when Robert Tasker founded it, joined by his brother William. They produced ploughshares and farm machinery and became adept engineers. They were however slow to adopt repeat-production techniques. Whilst skilled at making beautifully engineered steam engines - usually"portables" and traction engines - they didn't fully realise their potential with the full onset of the railways in the 1860's and were still largely sticking to patenting and making farm machinery. By then Taskers had passed to the subsequent generation and become "Tasker & Sons". The Well-winch salvaged by LASSCO in Henley on Thames dates to this period.

Into the 20th Century the company found success with the "Little Giant" a 3ton traction engine - producing 300 of them - but demand for steam was soon dwindling. After the First World War, on the brink of closure, Taskers found a new line that revived the business entirely: trailers. They continued making trailers, for general haulage and heavy plant, for the next few decades. As with many medium-sized manufacturers they were bought-out by successive larger conglomerates. The Waterloo foundry was finally shut down in 1983. It was flattened and is now a housing estate. However, an extraordinary record of its products has survived.

Arthur Fuller had become managing director of Taskers in 1932 and was the first to realise that Taskers had an unusual history which should be preserved. In 1948 he began to retrieve engines and other Tasker products from all over the country. In its final form, in a hall beneath 1960's company offices, the factory museum held 108 exhibits, including 23 engines and an RAF Spitfire on a "Queen Mary" Trailer.

However, in 1968, Taskers was taken over again; it was decided the collection should be sold off. A charitable trust was hurriedly formed to raise money to buy as much of it as possible. Hampshire County Council Museums Service was also alerted, so that when the sale took place in February 1969 nearly three-quarters of the collection was bought up and entered public ownership. The collection has been added to over the years, resulting in one of the most comprehensive single company collections in the public domain - much is on display at the Milestones Museum in Basingstoke with the Tasker Archive now held with the Hampshire Museum Service in Winchester.

Enquire about "A mid Victorian cast and and wrought iron well winch,"