c.1890, designed in 1881 by James B. Petter of the Nautilus Stove Company of Yeovil, Somerset,

the overscrolled hood with a field of relief cast ornament and spirally cast ribs to the sides, the grill with a brass trivet, bearing the enamelled maker's badge to the returns reading: "James B. Petter, Nautilus Works, Yeovil, England; The Nautilus Grate, Patent", the applied foundry stamp to the back bearing the maker's details and a numbered "4868"

The history of James Beazeley Petter and the ground-breaking engineering work of his Somerset firm is worthy of note.

The origin of The Nautilus Stove Co, making grates and kitchen ranges, is found in 1865 when John Petter of Barnstaple, bought an ironmonger's business in Yeovil, Somerset as a present for his son, James Bazeley Petter, on his marriage to Charlotte Branscombe. Within a few years James had expanded his retail ironmongery and engineering business by purchasing "Yeovil Foundry". He took into partnership the manager, Mr Henry F Edgar.

Producing agricultural implements and machinery, the firm of "Petter & Edgar" prospered, but it was Petter's invention of the 'Nautilus' grate in 1881, which brought the firm to national attention. In 1882 Petter showed his Nautilus Grate at the "Manchester Smoke Abatement Exhibition" and, after Queen Victoria had them installed at Balmoral Castle and Osborne House, demand for them grew substantially. The company boomed - the foundry now operating from the "Nautilus Works" in Reckleford.

The partnership was dissolved following Henry Edgar's fatal accident in 1886. Shortly after, with the entry of James’ talented 16 year old twin sons Ernest and Percy, and an exceedingly clever all-round engineer and designer, Mr Ben Jacobs, the firm diversified and became innovative and successful manufacturers of oil engines too. They also dabbled with steam and electric vehicles and invented the first self-propelled oil engine. They were cutting-edge innovators with early motor cars.

By November 1893 the firm was advertising the "Nautilus Dog-Grate by James B Petter, Nautilus Works, Yeovil" nationally in the 'The Times'. It later featured in 'The British Architect', 29 March 1895, "...with the many excellent qualities of which most of our readers are probably familiar, [it] is shown by the patentee, Mr. Jas. B. Petter, of Yeovil, and 20 Cheapside, EC".

In the same year, the Petter brothers and Ben Jacobs designed a one horse-power engine, which was installed in a ‘horseless carriage’ (built by Hill and Boll in their Yeovil carriage works). They went on to build twelve new vehicles but in 1897 with the failure of their latest model to win one thousand guineas prize money in a national competition, together with financial strain generally within their motor car division, the brothers returned their attention to the manufacture of oil engines. These they were were producing in large numbers and exporting them all over the world. One of the best known was the Petters 'Handy Man'. 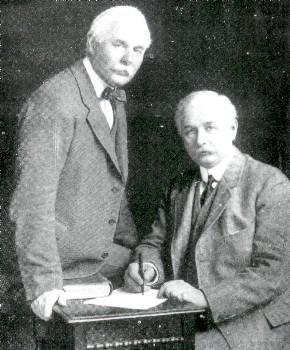 Above: Ernest and Percy Petter b.1870

In 1913, the firm purchased land for a new foundry and early in 1914 the first castings were poured. It was one of the largest foundries in the country.

Following the outbreak of the First World War in August 1914, Petters offered their entire manufacturing resources to the Government. From that, in 1917, the "Westland Aircraft" branch of the company was formed with an initial order from the Admiralty for supplying "Short 184" float planes. Around this time the Davis Gas Stove Company acquired "The Nautilus Stove Company".

Petters continued to make oil engines until 1937 when the business was acquired by Associated British Engines Ltd. and was relocated to Loughborough. Westland went on to become one of the world's most successful Helicopter manufacturers.

Much of the above comes from a 2008 article by Jack Sweet: See: http://www.yeovilvision.co.uk/data/57.htm