by Sir Charles Barry, removed from the Palace of Westminster,

the square façade recessed with a quatrefoil and centred with a foliate boss,

The Palace of Westminster burned in 1834.

The new Palace of Westminster was built with a sand-coloured limestone from the Anston Quarry in Yorkshire. In 1839, a committee including the architect Charles Barry, two leading geologists and a stone carver toured the country looking at quarries and buildings. Anston stone was chosen because it was cheaper and could be supplied in blocks up to four feet thick and lent itself to elaborate carving. 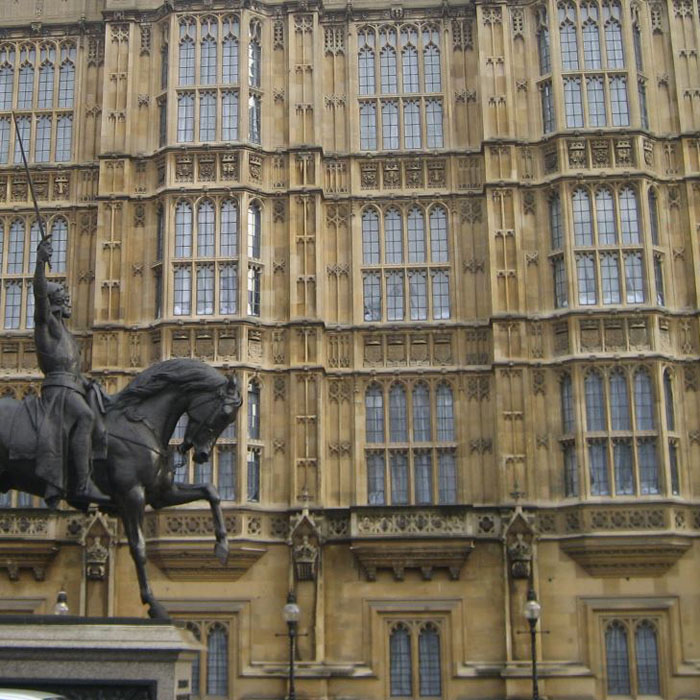 However, the stone quickly began to decay as a result of atmospheric pollution from coal burning in London and the poor quality of the material used. Although these defects in the choice of stone were visible as early as 1849, very little was done to prevent its decline during the 19th century. Barry himself experimented with various compositions on the stone and believed that the decay had been halted.

During the 1920s, it was clear that something had to be done, especially when a large fragment fell off the Victoria Tower and members on the Terrace were advised to sit near the river rather than underneath the main wall of the building. In 1928, it was deemed necessary to use Clipsham stone, a honey-coloured limestone from the Medwells Quarry in Rutland, to replace the decayed Anston. A restoration project began in the 1930s, but it was brought to a halt during the Second World War and was completed only in 1960.

The effects of these repair works and the addition of new stone nevertheless began to make the Palace appear like a patchwork quilt. By the 1960s, questions about it were being asked in the House of Commons.

By the 1970s, the effects of pollution were again visible, and a new programme of stone-cleaning and restoration was started in 1981: the north, west, and south fronts, the river front and the Clock Tower were completed by 1986. The Victoria Tower, whose cleaning was completed in 1994, was the last part of the exterior to be dealt with.

We know that this particular piece of architectural carving was salvaged by a Lords peer - mid 20th Century - presumably during one of the above restorations or perhaps as a result of bomb damage during the war. The block was positioned in the gardens of his Surrey house. The house passed to his daughter and then to the current owner of the property from whom LASSCO acquired it.

The Houses of Parliament are now to undergo a full restoration and re-fit. The works are out to temder for the £4billion project.

(Much of the above source: www.parliament.uk)

Nb. Also in stock at LASSCO Three Pigeons and also with Sir Charles Barry overseeing the design: The parapet ironwork of Westminster Bridge.