the delicately wrought panels of scroll-work centred by a single gate bearing a "MA" monogramme, the flanking piers, recess paneled to the front, with moulded cap-stones and ball-finial surmounts,

A Cistercian abbey was founded in Medmenham in the 12th century under the ownership of Woburn Abbey; it was not officially recognised by royal charter until 1200. In 1547, at the Dissolution of the Monasteries, the abbey was seized and given to the Moore family and then sold privately to the Duffields. It was while in the possession of the Duffields that the abbey became infamous as the location of "The Hellfire Club". The club, founded by Sir Francis Dashwood of West Wycombe Park was never originally known as The Hellfire Club; it was given this name much later. At the time it went under a succession of names, such as "The Brotherhood of St. Francis of Wycombe", "Order of Knights of West Wycombe", "The Order of the Friars of St Francis of Wycombe" and, with their meetings at Medmenham Abbey, they became the "Monks" or "Friars of Medmenham".

The first meeting at Dashwood's family home in West Wycombe was held on Walpurgis Night, 1752; a much larger meeting followed and was something of a failure and no large-scale meetings were held there again. Dashwood had leased Medmenham Abbey on the Thames from his friend Duffield the previous year and was having numerous - and quite considerable works done on the building. It was rebuilt by the architect Nicholas Revett in the style of the 18th century Gothic revival. At this time, the motto "Fais ce que tu Voudras" was placed above a doorway in stained glass. It is thought that William Hogarth may have executed murals within; none, however, survives.

According to Horace Walpole, the members'

"practice was rigorously pagan: Bacchus and Venus were the deities to whom they almost publicly sacrificed; and the nymphs and the hogsheads that were laid in against the festivals of this new church, sufficiently informed the neighbourhood of the complexion of those hermits."

At the meetings, the members addressed each other as "Brothers" and the leader, who changed regularly, was the "Abbot". During meetings members supposedly wore ritual clothing: white trousers, jacket and cap, while the Abbot wore a red ensemble of the same style. Legends of Black Masses and Satan or demon worship became attached to the club. Rumours abounded - female "guests" (a thinly veiled euphemism for prostitutes) were referred to as "Nuns". Dashwood's club meetings are known to have included rituals, pornography, banqueting and a lot of drinking.

In 1762 the Earl of Bute appointed Dashwood his Chancellor of the Exchequer. The club meetings became more infrequent. The original club members were dying off or had moved further afield. By the time the club was finished at Medmenham in 1766 there were a number of published works that had revealed the nature of the Friars - the scandal was to a degree celebrated by Dashwood.

Back to the screen: We don't know at what stage the screen was introduced to the gardens at Medmenham. We know that it formed the terminus to the formal lawns laid out to the East of the Abbey and linked with formal hedges giving those lawns some privacy and shelter from the river frontage. The iron work and stone piers are certainly continental, probably French, and the screen is beautifully forged with the intersections of the square bar carefully dovetailed and pinned. The single gate bears the "M. A" monogramme which appears contemporaneous to the rest of the work which could indicate that the work was commissioned, or at least embellished on the Continent prior to being brought over. 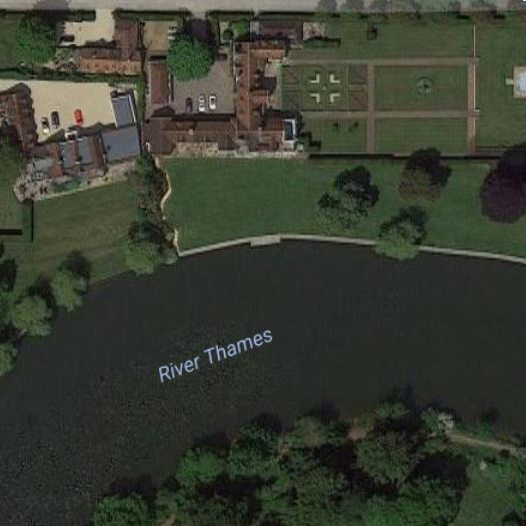 By the time LASSCO found it, the stone columns had been stacked alongside the heli-pad for a number of years prior to the re-routing of the driveway that has truncated the parterre. The ironwork had been hidden in the woods and was completely over-grown.

At the time of writing Medmenham Abbey is on the market and can be bought for offers exceeding £10million.

Jerome K. Jerome describes the Abbey in "Three Men in a Boat":

"...nestling by a sweet corner of the stream, is what is left of Medmenham Abbey.  The famous Medmenham monks, or "Hell Fire Club," as they were commonly called, and of whom the notorious Wilkes was a member, were a fraternity whose motto was "Do as you please," and that invitation still stands over the ruined doorway of the abbey.

Many years before this bogus abbey, with its congregation of irreverent jesters, was founded, there stood upon this same spot a monastery of a sterner kind, whose monks were of a somewhat different type to the revellers that were to follow them, five hundred years afterwards.

The Cistercian monks, whose abbey stood there in the thirteenth century, wore no clothes but rough tunics and cowls, and ate no flesh, nor fish, nor eggs.  They lay upon straw, and they rose at midnight to mass.  They spent the day in labour, reading, and prayer; and over all their lives there fell a silence as of death, for no one spoke.  A grim fraternity, passing grim lives in that sweet spot, that God had made so bright!

Strange that Nature's voices all around them - the soft singing of the waters, the whisperings of the river grass, the music of the rushing wind - should not have taught them a truer meaning of life than this.

They listened there, through the long days, in silence, waiting for a voice from heaven; and all day long and through the solemn night it spoke to them in myriad tones, and they heard it not."

Enquire about "A French stone and wrought iron screen,"