As so often here at Brunswick House, an upcoming event of ineffable modernity  reminds us of things past – usually more decorous.

Such an event is the World Paddle-boarding Championship scheduled to take place on the London River between the Upper Pool and Barn Elms Reach on Saturday, 18th May [so we are advised by the Port of London Authority].

The spectacle of wet-suited board paddlers furiously wobbling down Vauxhall Reach will be a striking and unusual sight, but its very novelty only serves to reanimate Vauxhall’s dormant links with the very earliest days of organised water sports. 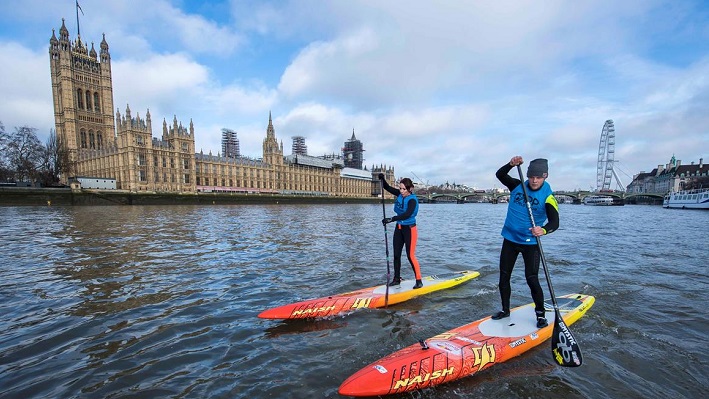 Until the Industrial Revolution arrived in Vauxhall, the extensive gardens of Brunswick House ran right down to the waters edge where Brunswick Pier stuck out far into Vauxhall Reach for the convenient mooring and landing of river craft. On long summers days the willows and alder trees of Brunswick House gardens would have reached down almost to the waters edge, their branches trailing in the unembanked flood at high tide. In those years London met it’s river face-on with quays and stairs and long stretches of foreshore expressing a presumed and unimpeded right of access to the river on the part of all Londoners.

On just one such summers day in 1794 the Times of London featured an advertisement for a form of boat race on the Thames that would have seemed just as curious and new-fangled in it’s own time as paddle-boarding does to us today.

This notice in fact marked at least the 8th year of such a cup, ‘The Cumberland Cup’ being held on Vauxhall Reach. Yacht racing as a leisure pursuit began in England July 6, 1775 when an advert appeared in the London Public Advertiser;

“A silver Cup, the gift of His Royal Highness the Duke of Cumberland, is to be sailed for on Tuesday the 11th Inst, from Westminster Bridge to Putney Bridge and back, by Pleasure Sailing Boats, and constantly lying above London Bridge. Any gentleman inclined to enter his Boat may be informed of particulars by applying to Mr. Roberts, Boatbuilder, Lambeth, at any time before Saturday Noon Next.”

The match was in fact not sailed until July 13th, owing to poor weather. When it did occur, the cup, valued at 20 guineas, was won by the Aurora, which belonged to Mr. Parkes, “late of Ludgate Hill.” And “His Royal Highness, who honored the sport with his presence, filled the Cup with wine, drank out of it, and delivered it to Mr. Parkes.” This was the birth of yacht-racing as we know it at today.

This ‘match’ however may, in truth, have appeared more like a procession such as witnessed by British Grand Tourists on the Grand Canal in Venice. The stately pageant of barges and boats was to be emulated under the imported name of a ‘regatta’. Sailing vessels and pleasure boats would have been lined up along the opposite banks of the river while ‘competitors’ passed in elegant parade between the assembled notables. Regardless of this, it is almost certain that these men were the very first to organise a yacht club on the Thames which they named the Cumberland Fleet in honour of their Ducal patron.

This spectacle of Venetian splendour passing along the London River could not but have caught the keenly speculative eye of the owner of Vauxhall Pleasure Gardens, Mr Jonathon Tyers. In 1786 he chose to mark the 50th anniversary of his ownership of Vauxhall by staging his own river races and ‘regatta’. The days events would naturally include the already fiercely contested and traditional Waterman’s wherry race. However, having seen the glorious spectacle of the Cumberland Fleet sailing along Vauxhall reach, Mr Tyers invited (not to say appropriated) their race ‘in-house’, offering a brand new Sliver Cup as enticement to stage their race at Vauxhall. This race and the first Vauxhall Cup was won by the yacht Prince of Wales 6 August 1786.

Like most of Mr Tyers entertainments the Vauxhall Cup was a roaring success and grew as the summers passed. The sailing match was held annually, growing not only in popularity but also in dignity and prestige. for the match of July 1789 11 boats, complete with specially commissioned Vauxhall Cup pennants, competed for the silverware:

Over the following years Mr Tyers and the proprietors of Vauxhall Gardens would consolidate and expand the spectacle into one of the key events of the London season. In 1794 the public allure of the sailing and rowing matches were strengthened still further by the placing on the river of a spectacular float mounted by a Neptune’s Car drawn by tritons, containing a representation of Father Thames, attended by a variety of river gods, goddesses, and bands of music.

“The whole affair was propelled by some invisible means, and appears to have been an object of great wonder and admiration.”

In 1796 the spectacle was in full swing:

“The river was covered with vessels of all descriptions from barges to wherrys, and the Turkish Ambassador was in the Vauxhall cutter, and the magnificent car was exhibited on the occasion filled with musicians, and formed no less a splendid sight than an attractive entertainment.”

By the turn of the century the sport of yacht racing was well established. The race of 1800 was attended by crowds of spectators all along the Surrey shore who witnessed the Vauxhall Cup being snatched by the Cumberland. An engraving appeared in the Sporting Magazine of that year, giving us our  first clear impression of the yachts passing the committee boat outside Lambeth Palace.

By the year 1805 the Vauxhall Regatta was in its pomp and was described in the close detail of wonderment, by an eyewitness on the day:

“The ceremony commenced with a barge belonging to the Royal Exchange fire-office going down from Westminster to Black-friars Bridge at half-past five with a full band of music on board. Shortly after that two cutters belonging to the Messrs. Roberts, the boat builders, went the same route, the one having a band of music, and the other some of the principal persons concerned in the property and management of Vauxhall Gardens, the prize behind them supported by two servants in livery. At 17 minutes before six the boats set off with a light breeze nearly east, and the Daphne belonging to Mr. Unwin, formerly of the Fondroyant, took the lead almost at starting and was the first that shot Westminster Bridge. The whole fleet went up the river with the wind upon their quarter, and with flowing sail, until they came abreast of Mr. M. Coy, the shipbreaker’s yard at Nine Elms. The St. George was the first that shot through Battersea Bridge, and at Wandsworth the Daphne was ahead, but the Mermaid pressed so close upon her that the boom of the latter swung against the back-stays of the former. By a bold manœuver, such as naturally strikes the mind of a British sailor when he finds himself close pressed, the Daphne was then seen to bear away to leeward, in order to prevent herself from being becalmed. By this means she got into slack water, and as the tide was running down strongly she made greater headway and fell less to leeward than her competitor. On the next tack the advantage gained by this manœuver was evident, as the Daphne sailed free on a fresh tack while the others were close-hauled on the former. At half-past eight the Daphne came past Cumberland Gardens, which was full of genteel company, who had flocked there to see the spectacle, on account of the extent of the accommodation of these grounds. The Mermaid came in about five minutes after, but the whole did not reach Vauxhall stairs until after nine o’clock. The river was so completely covered with boats that it reminded one of the descriptions given of the swarm of canoes that assembled upon Captain Cook making his appearance in New South Wales.”

The last Vauxhall Regatta was staged in 1810 where the last silver Vauxhall cup itself was won by the St George under Cpt. Dunston. By this time a number of cups were awarded for races under sail and for rowed wherrys. Further up river, at Battersea, Ranlegh Gradens were staging races in competition with Vauxhall and the sport of pleasure boat racing had by now spread across the nation with matches being held Southampton, Bristol, Plymouth and at Blackwall on the lower Thames.

Although the glories of the Vauxhall Cup, Like those of Vauxhall Gardens, are now no more the legacy they have left to the sport of Yacht Racing continues. The Royal Thames Yacht club acknowledging the link in their official history.

The Cup was presented by one Jonathan Tyers, who had just bought and taken over the Vauxhall Gardens.  These ‘Gardens’ were a pleasure park beside the Thames at Vauxhall and were by then being used as a starting and/or finishing venue for the various races by the Cumberland Fleet, of which the annual Cumberland Cup race was the most celebrated. Not only was this therefore the world’s first open meeting, but the Vauxhall Cup was surely the world’s first sponsored event, and Tyers the sport’s first commercial sponsor.”

The history of the Royal Thames Yacht Club records a peripatetic period in the early years as the club sought premises to house their growing number of members, passing through Coffee Houses and what they refer to as ‘the infamous Vauxhall Tea Gardens’ before finding their first home on Albermarle Street. Is it inconceivable in those early years, trudging ashore at Vauxhall stairs, when the nearest bridge was at Westminster and the unmetalled roads through riverside Lambeth precluded easy travel, that they may have retired to the warmth and comfort of Brunswick House? Alas, the record is silent. But is it any more inconceivable than that the Venice of Byron and Canaletto should have been raised up on the muddy banks of Blake’s Lambeth?

She looks a sea Cybele, fresh from ocean,
Rising with her tiara of proud towers
At airy distance, with majestic motion,
A ruler of the waters and their powers: