LASSCO has acquired a set of cast iron door cases from the original headquarters of the White Star Line – owner and operator of RMS Titanic.

Built in 1903-1906 by the firm of H. Tanner Jr, Oceanic House has significance and setting that belies its present anonymity at the confluence of Cockspur Street and Pall Mall East. In architectural terms alone the interesting early Neo-Mannerist Portland stone frontage under a leaded triple storey ‘top hamper’ possesses a high imperial swagger and self-confidence that merits closer attention.

To the observant passer by the large square-headed central doorway, facing boldly up Pall Mall beneath architraved bronze casements, is richly suggestive of faded significance. The bold three-storey engaged column portico with Ionic capitals of modified ‘Bassae-French’ design speaks of a lapsed, yet still unmistakable, monumentality of intent.

There is a distinctive grey slate plaque commemorating an earlier building and an alternative heritage to the site on the Cockspur Street frontage but that in itself is a red herring. The Rugby Football Union was founded on this site over 140 years ago but the name ‘Oceanic House’ should, by rights, evoke an altogether more melancholy remembrance.

It was on this very site, on the 15th of April 1912 that the news of the sinking of the Titanic and the resultantly ‘great loss of life’ was brought home to the headquarters of the White Star Line in the heart of London, the imperial capital. The purpose-built command post of the famous transatlantic conveyor was meant to inspire a confidence in investors and passengers alike but on that morning in 1912 it must have wrought another effect on the thoughtful observer – hubris and nemesis. 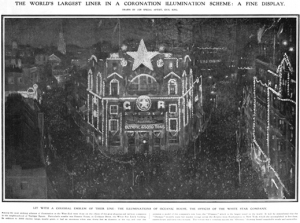 The sense of shock and disbelief can be clearly seen in the faces of the employees gathered under the great doorway that day in one of the most famous photographic images of the 20th century. It depicts the humble Lambeth news-boy Ned Parfitt of Windmill Street bringing the calamitous news of the disaster down about the very ears of the mighty White Star line owners.

The interior of Oceanic House is depicted that day in another, less well known image. It shows clerks clustered around the front counter conversing grimly with investors paralysed with worry. Messenger boys in a blur of frantic motion come and go through the great front door with updates, news and manic speculation; all this beneath the fine bronze and rich mahogany detailing of a vestibule that had vaunted to christen a ship ‘The Unsinkable’.

LASSCO has managed to salvage a modest relic of this building from its latest remodelling, the cast iron pilasters, panels and frieze of the original Lift gates from the ground floor. One can only imagine the trepidation with which some modest telegraphist stood alone in the silence of the lift car as he carried the news of the Titanic’s sinking up to the board room above.

The castings are rendered in iron with rich and exuberant foliate detail. They are both handsome objects in themselves and deeply evocative and thought provoking artefacts one of the 20th Century’s defining news events.